Now Streaming: MAKING OF A MOGUL USA Highlights the Tricks of Elite Trades 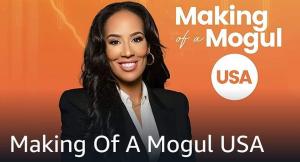 My hope is that this show will inspire future generations of entrepreneurs of all ages to chase their passion and dreams to create widely successful businesses that deeply impact our community.”
— Tanya Sam

ATLANTA, GEORGIA, USA, January 24, 2023 /EINPresswire.com/ -- The term "entrepreneur" is frequently thrown around to describe successful people who more or less made something from nothing. That's a simplistic explanation as to what an entrepreneur is, but it doesn't scratch the surface of what an entrepreneur actually does. The true role of an entrepreneur is something much more complex than what mere words can offer. That's why shows like MAKING OF A MOGUL USA exist. So they can dive deep into the ins and outs of profitable business models, and learn from the leaders of those companies to find out how they make it all possible.

Hosted by Tanya Sam of The Real Housewives of Atlanta, MAKING OF A MOGUL USA brings the lifestyles of the rich and famous into your home. With special emphasis given to entrepreneurs of color, and the unique challenges they face during the everyday hustle and bustle of keeping a business afloat. The program is directed by Michael Djaba and executive produced by Cynthia Stephens and Eric Stephens.

"The Making of a Mogul docu-reality series tells the genuine stories of resilience of many highly acclaimed and successful business moguls and as well as moguls- in-the-making on their way to future success." – Tanya Sam

Porter + Craig Film & Media Distribution is proud to announce that the entire first season of MAKING OF A MOGUL USA is now available to stream via Amazon Prime Video.

Join Tanya Sam as she follows accomplished business people all over the country, like world renowned R&B artist Akon as he attempts to raise six billion dollars to build his own city, along with record producer Gibson Kagni. Tanya also follows John Hope Bryant, founder of one of the biggest minority owned single housing companies in America, with assets valued at 110 million dollars in just under three years.

"My hope is that this show will inspire future generations of entrepreneurs of all ages to chase their passion and dreams to create widely successful businesses that deeply impact our community." – Tanya Sam

Together these self-made success stories provide an inspiring picture of the American Dream through their own unique visions.

ABOUT PORTER + CRAIG FILM & MEDIA DISTRIBUTION
Porter + Craig is one of the newest and most exciting partnership ventures in independent film and TV sales (based primarily in Beverly Hills with connections in Washington DC and Atlanta), with two youthful but experienced industry veterans joining forces to take digital development to the next level.

ABOUT CEM MEDIA GROUP
​CEM MEDIA GROUP is a multiplatform media company focused on all aspects of media creation from film and television development through to production. Based in Atlanta with partners in the United Kingdom and Sub Saharan Africa. They have a "Filmmaker first" approach built on inclusion, innovation and respect whilst finding exceptional stories told by extraordinary storytellers.

Making of a Mogul USA Hosted by Tanya Sam