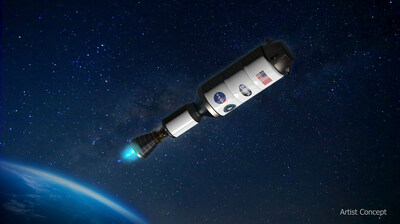 NASA and DARPA will partner on the Demonstration Rocket for Agile Cislunar Operations, or DRACO, program. The non-reimbursable agreement, designed to benefit both agencies, outlines roles, responsibilities, and processes aimed at speeding up development efforts.

"NASA will work with our long-term partner, DARPA, to develop and demonstrate advanced nuclear thermal propulsion technology as soon as 2027. With the help of this new technology, astronauts could journey to and from deep space faster than ever – a major capability to prepare for crewed missions to Mars," said NASA Administrator Bill Nelson. "Congratulations to both NASA and DARPA on this exciting investment, as we ignite the future, together."

Other benefits to space travel include increased science payload capacity and higher power for instrumentation and communication. In a nuclear thermal rocket engine, a fission reactor is used to generate extremely high temperatures. The engine transfers the heat produced by the reactor to a liquid propellant, which is expanded and exhausted through a nozzle to propel the spacecraft. Nuclear thermal rockets can be three or more times more efficient than conventional chemical propulsion.

"NASA has a long history of collaborating with DARPA on projects that enable our respective missions, such as in-space servicing," said NASA Deputy Administrator Pam Melroy. "Expanding our partnership to nuclear propulsion will help drive forward NASA's goal to send humans to Mars."

Under the agreement, NASA's Space Technology Mission Directorate (STMD) will lead technical development of the nuclear thermal engine to be integrated with DARPA's experimental spacecraft. DARPA is acting as the contracting authority for the development of the entire stage and the engine, which includes the reactor. DARPA will lead the overall program including rocket systems integration and procurement, approvals, scheduling, and security, cover safety and liability, and ensure overall assembly and integration of the engine with the spacecraft. Over the course of the development, NASA and DARPA will collaborate on assembly of the engine before the in-space demonstration as early as 2027.

"DARPA and NASA have a long history of fruitful collaboration in advancing technologies for our respective goals, from the Saturn V rocket that took humans to the Moon for the first time to robotic servicing and refueling of satellites," said Dr. Stefanie Tompkins, director, DARPA. "The space domain is critical to modern commerce, scientific discovery, and national security. The ability to accomplish leap-ahead advances in space technology through the DRACO nuclear thermal rocket program will be essential for more efficiently and quickly transporting material to the Moon and eventually, people to Mars."

"With this collaboration, we will leverage our expertise gained from many previous space nuclear power and propulsion projects," said Jim Reuter, associate administrator for STMD. "Recent aerospace materials and engineering advancements are enabling a new era for space nuclear technology, and this flight demonstration will be a major achievement toward establishing a space transportation capability for an Earth-Moon economy."

NASA, the Department of Energy (DOE), and industry are also developing advanced space nuclear technologies for multiple initiatives to harness power for space exploration. Through NASA's Fission Surface Power project, DOE awarded three commercial design efforts to develop nuclear power plant concepts that could be used on the surface of the Moon and, later, Mars.

NASA and DOE are working another commercial design effort to advance higher temperature fission fuels and reactor designs as part of a nuclear thermal propulsion engine. These design efforts are still under development to support a longer-range goal for increased engine performance and will not be used for the DRACO engine.