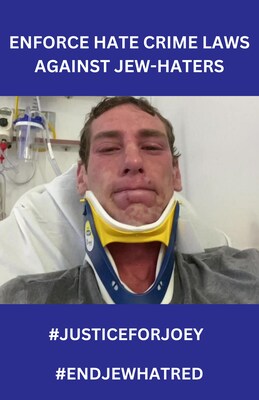 End Jew Hatred is gathering to demand justice for Joey Borgen, who was brutally attacked in a gang assault by Jew-haters in May 2021. One of his attackers, who allegedly said "If I could do it again, I would do it again," will be offered a plea deal by Manhattan District Attorney Alvin Bragg on Thursday, when all of Mr. Borgen's alleged attackers will be in court for a hearing.

"The shameful and unacceptable leniency shown towards the individuals who assaulted Joey Borgen only encourages more violence against Jews," said Brooke Goldstein, co-founder of the End Jew Hatred movement. "We demand justice for Joey and for the entire Jewish community, not ridiculous plea deals. We need to impose consequences to end Jew-hatred, not sentences that being fresh trauma to the Jewish people."

Despite the well-documented rise in antisemitism and hate crimes targeting Jews in New York City, since Alvin Bragg was elected District Attorney, there has not been a corresponding increase in prosecutions with meaningful penalties.

To learn more about the rally, and how you can support Joey Borgen, please visit www.justiceforjoey.org.

#EndJewHatred is an international grassroots civil rights movement that unites ordinary people, activists, and organizations from around the world who support the cause that defines the movement: to end Jew-hatred in our lifetime. It does so by altering public discourse to make Jew-hatred unacceptable in society, while empowering Jews with positivity and strength to discover and enjoy their heritage in whichever manner they choose, without fear of attack or persecution.