Tesla announced on Tuesday it will build a high-volume factory for its Semi as part of a planned $3.6 billion investment in the sprawling plant near Reno, Nevada, known as Gigafactory Nevada.

The Semi went into limited production late last year at Tesla’s plant near Austin, Texas, but the reservation process for the Class 8 semi-trailer truck was closed last August, just months after it started. It means only some early customers, like Pepsi, have taken delivery.

An update on the Semi program is expected during Tesla’s fourth-quarter earnings call later today.

A new battery factory at the Nevada site is also planned as part of the investment. It will produce Tesla’s 4680 battery cell and have an annual capacity of 100 gigawatt-hours, or enough batteries for 1.5 million light-duty vehicles, Tesla said. 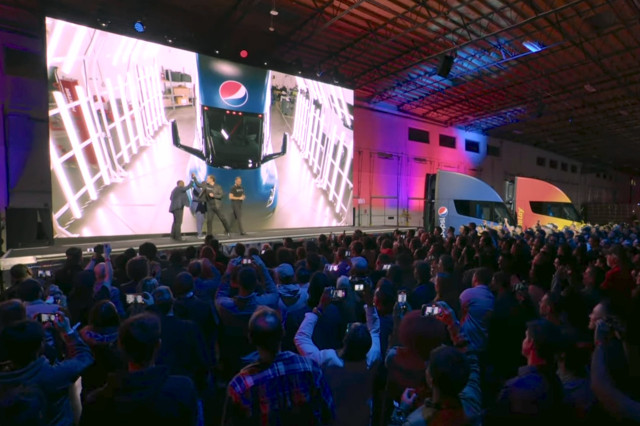 The investment, which is expected to create around 3,000 new jobs, is on top of $6.2 billion in investments Tesla has made at the Nevada site since 2014. The site is where Tesla currently produces batteries and other components. Timing for the upgrades wasn’t mentioned.

Tuesday’s investment announcement comes just weeks after details of a $717 million investment in Tesla’s Texas plant surfaced. In addition to low-volume Semi production, the Texas plant also handles Model Y production for the eastern part of the U.S. It is also the planned site for production of the Cybertruck pickup truck, which could start later this year.

Tesla is thought to be planning at least two more plants for its growing global portfolio. One is a second plant in Shanghai to take capacity there to more than a million vehicles per year. Tesla mentioned the second plant in a letter last May sent to officials in Shanghai’s Lingang Special Area, where the existing Shanghai plant is located.

Another plant may be built in Mexico. Bloomberg reported last month that Tesla is close to announcing plans to build a plant in the automotive hub of northeastern Mexican state Nuevo León.

Club Q hero to attend Biden’s State of the Union …

Teacher arrested with meth at school

Police activity at South Academy and I-25, Courtesy: …

Club Q hero to attend Biden’s State of the Union …