The Squad Solar City Car is the product of Dutch firm Squad Mobility, which was founded in 2019. Unveiled last May, it uses sunlight to recharge its battery pack. Deliveries are scheduled to start in 2024, and Squad recently confirmed that the vehicle will be coming to the U.S.

However, this tiny two-seat EV (a four-seat version is planned) doesn’t really qualify as a car in the U.S. It was built to conform to the European Union’s L6e category, technically making it a “light quadricycle.” In the U.S., Squad said it’s classified as a Low Speed Vehicle (LSV), with a top speed limited to 25 mph. The company sees gated communities, resorts, and other enclosed properties as likely use cases, but does note that three of the vehicles can fit in a single street-side parking space. 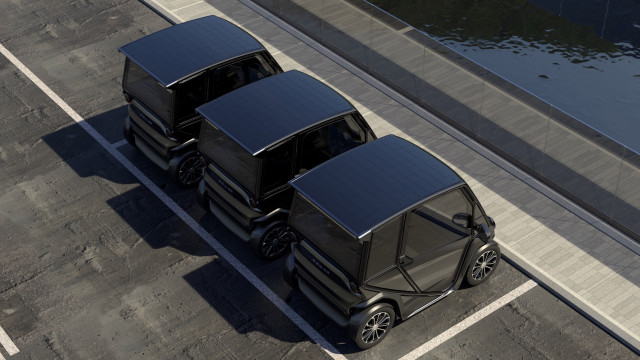 Not that the Squad EV will be capable of higher speeds. The 772-pound vehicle is propelled by a pair of 2-kw (2.6-hp) motors, one driving each rear wheel. They’re powered by a 6.4-kwh battery pack, which in turn is charged by a roof-mounted solar panel with a peak output of 250 watts, or by conventional Level 1 AC charging.

On sunny days in the Netherlands, Squad estimates the solar panel will provide 13.6 miles of range, or up to 19.2 miles in sunnier Las Vegas. The battery pack is comprised of swappable and portable modules, providing up to 62 miles of estimated range exclusive of solar power. Base versions only have a 31-mile range, however.

Paying only the base price also means forgoing doors, although the Squad EV does have three-point seatbelts, a roll cage, and front and rear crash structures.

Solar-supplemented EVs appear to be a new trend, but most of the other so far—like the Aptera, the Sono Sion, and the Lightyear 0 are a lot more expensive. The Squad Solar City Car also appears to be the first to apply the solar concept to a micro-EV.

Among other micro-EVs—albeit without solar—the Citroën Ami is being rented in Europe for cheap. Citroën quoted a rate equivalent to less than $23 a month when the Ami was launched in 2020. The automaker no longer sells cars in the U.S., but has teased plans to bring the Ami here as part of parent Stellantis’ Free2Move mobility service.

Another one is the Eli Zero, from an LA firm that plans to sell Chinese-made two-seaters in the U.S. and Europe. Eli began production in small numbers in September—initially only for Europe.

Tyre Nichols’ mother: ‘No mother should have to go …

First Chair for the Weekend: Vail

Giving students the tools for success